The story was so special that it certainly deserved a look. Some men, who grew up in the few houses surrounding the site, reported that when they were little they used to play in the grove on the hill and they frequently found skulls. So, it was decided to proceed with a first inspection, which initially did not give any positive feedback. So much so that the participants in the reconnaissance decided to leave the hill, obviously disappointed. Just as they descended, however, one of them turned and glimpsed two or three stones emerging from the ground. They decided to approach and dig around them, quickly confirming the presence of significant stones.

The consultation of some documents confirmed the presence of a small church dedicated to Santa Mustiola right on that small hill. Since this hill is called “Mustarola”, a first hypothesis was formulated: perhaps the identified stones made up a wall of the church, although this was not very compatible with the location (too low compared to the top of the hill). The more the excavation widens and deepens, the clearer it appears to archaeologists that they are dealing with a wall made with different construction techniques. The upper part is a later reconstruction, with stones of different size and color and with a lot of lime, while the lower ones are more homogeneous and straight. All was left to do was proceeding in the other direction, to evaluate thickness. After digging towards the inside of the hill, a floor was found, with a certainly intriguing feature. It was undoubtedly a floor of cocciopesto, a conglomerate of mortar, stones and crumbled bricks, a typical construction that the Romans used as a waterproof coating in their tanks and swimming pools. So, the excavation continues with renewed enthusiasm towards the hill and a very high concentration of ceramics is found. Non-medieval material, but almost exclusively datable between the 5th and the 7th centuries. Ceramics are very useful for determining dates and geographical locations, if you have the ability and the good luck to find precise comparisons. In this case the comparison was made with a little jug called “orciolo” produced in Fiesole, which has a peculiar engraving and coloring, typical of the Longobard workshops in Fiesole and widely documented by archaeological finds. This element therefore provides certainty: here on this hill was a Longobard settlement.

Evidently, whoever inhabited the hill had used the Roman cistern as if it were a dumpster. As a matter of fact, together with the numerous ceramic finds, remains of meals were also found, with slaughtered bones. The work of cleaning the cistern goes on accurately and the perimeter wall comes to light with two preserved corners. The wall, found with a little luck on the day of the first inspection, perhaps served as a support for the ground but also as a ground front for water. The presence of a Roman cistern here, in the open countryside, a unique case outside towns, confirmed the importance of the road for trades; a confirmation reinforced by the discovery of remains of amphorae from all over the Mediterranean Sea, as evidence of the high economic and social importance of those who lived here. 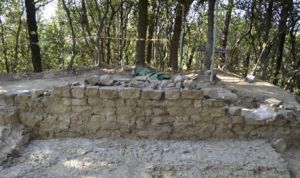 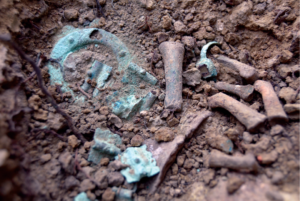 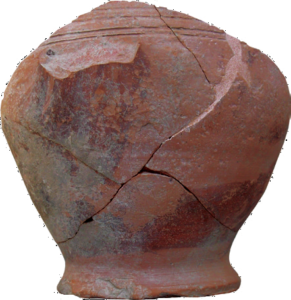 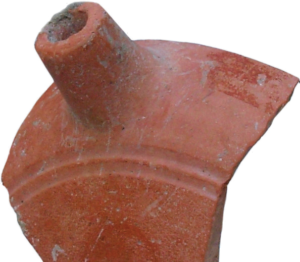 The hill Mustarola, so small and so far from the central places of history, provides another surprise. One of the finds is an extremely particular table ceramic with a closed shape. It is a production called “sealed earth”, of Tunisian production, with a pouring spout, rarely found in Italian archaeological contexts, which therefore confirms the high socio-economic level of the site. With the fall of the Roman Empire, the defenses that had protected the territories of the empire until then gradually fell and the Longobards arrived in Peccioli; here, on this hill, a small military post was built. The road, analyzed from the archaeological point of view, seems to draw a border between the Byzantine possessions, so Volterra, and the Longobard territory pertaining to the Duchy of Lucca.

In the following centuries, a church was built on top of the remains of the military post. The few people who were around the hill in the Longobard era must have thrown all the scraps of their stay, as mentioned, in the Roman cistern. With the end of the Longobard domination in the 8th century, the archaeological traces end: the “mystery” of three hundred years of “darkness” starts now. Suddenly, in the early years of the 11th century, written sources indicate that a little shrine already exists here, in a place called Santa Mustiola. So, something consecrated, which belonged to the abbey of Sesto di Lucca.

It is precisely the name Mustiola, a saint venerated in Chiusi (the other Longobard duchy in Tuscany), which suggests that the Longobards may have built a small altar here, which was then resumed and enlarged in the Middle Ages. The shrine was transformed into a small church, about fifteen meters long, built right on the top of the hill.

In the upper part you can see one of the walls of the church, built with the typical construction technique of the Romanesque churches of our territories. With the excavation going on, confirmation of the stories of the villagers also came out: there are various burials throughout the church area. Although the church was small, it was a very busy one, being on a road walked by pilgrims traveling towards the Francigena pilgrim route. Even in this case, confirmation comes from the finds: coins from Lucca, Florence, Pisa and Siena found during the excavation. From the position of the bones, it was deduced that the tombs were opened and used several times, as is often the case. The internal part of the church, along the perimeter walls, was considered privileged, dedicated to people of the highest rank.